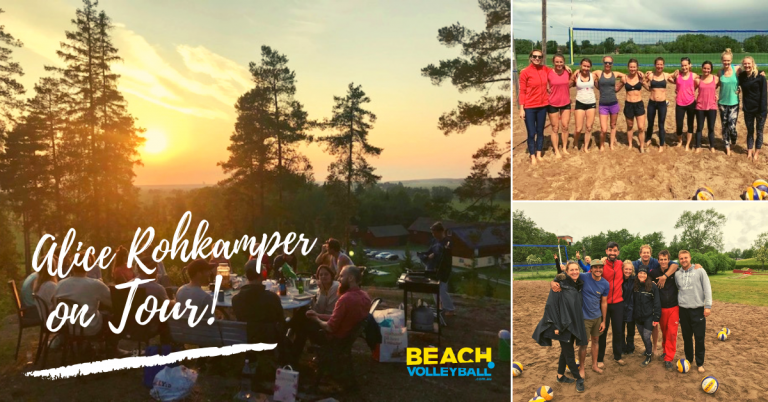 Check out what our super coach Alice was up to during her quick trip to Europe. She went to Sweden for three weeks to coach at two camps and add some Australian flair.

HI ALICE, THANKS FOR SHARING YOUR RECENT COACHING ACTIVITIES WITH US.

Hej! I went to Sweden for 3 weeks. A very last-minute plan – but so glad I went. I had a great time, coaching at two Camps, with a holiday in between, to a gorgeous island called Gotland.

Could you share some insights on the camps you went to?

1) First stop was in Uppsala, which is 1 hour from Stockholm.

The training Camp was organized by Johan Walkey and Elin Hilding who are members of the local Beach Volleyball Club. There were 36 players training on 6 courts, with 6 coaches. 5 of these coaches were from Australia.

Al (Allister Lyne from Vic Beach down in St Kilda and South Melbourne) was the Head Coach. He knows his stuff, and it was great to follow his lead. We also had Kiahl Morley; groovey legend from the Sunshine Coast, (if you ever head up that way, be sure to get a coffee from Kiahl’s café Alley Cat, in Coolum – and head down with your volleyball for a pepper, to one of the many beautiful beaches around the area). Tom Faulkner from Victoria, who currently lives and works in Dublin was back there for another year, as was Hannah one of our coaches from here in Manly – who spends much of her time in Europe, and Ivan Vatas, originally from Slovakia who currently lives and works in London also returned to join the Uppsala Camp after coaching there previous years.

The beauty of BEACH VOLLEYBALL is the international opportunities, playing and coaching – at all levels, social or competitive. You get to meet amazing people with a great energy and love of the game. Johan Walkey is one of these people. We had a really fun time with this bunch of coaches and players.

The Uppsala Camp itinerary was over a weekend. With a 3 hour morning session. Lunch break. 3 hour afternoon session. And the same on day 2. We warmed-up as a big collective group with all the players, and then split into the 5 different groups/levels for the session. Each coach rotated through the groups over the weekend, so we could reach out to as many players as possible, covering the topics:

All players and coaches in the action all at the same time. The venue Fyrishov was great; close to the city centre – a big Sports Complex, campground nearby, big indoor swimming pool, stadium, gym, and restaurant / cafeteria which catered the lunch for the camp. Many players from Stockholm drove or caught the fast train home, and came back the next day.

Everyone was pooped by the end of the weekend. Playing & coaching for 12 hours over two days – but that’s how we like it… Lots of volleyball!!!

2) The second camp BEACH WEEKENDS, was on a private property in Enkoping, also 1 hour from Stockholm. Hannah Rohkamper was the head coach, and in true little sister style – I tagged along as her assistant coach. We had two groups. 8 MEN and 8 WOMEN. ir level was similar / equivalent to our AA level here with the NBVA.

We ran 5 sessions that went for 1.5 hours for each group, from Thursday afternoon, to Sunday afternoon. With a mixed tournament on Saturday afternoon.

Gabriela Casadei and Peter Ekblom have 4 sand courts. The accommodation was 5 big glamping tents, or in the houses. They host Weddings in a big traditional country Barn, with 20 Weddings booked for this year. The setting is beautiful, with green fields and lovely trees. Gabriela’s father Giovanni who is a talented chef catered for everyone with amazing Italian food. I was in heaven!

Check out more at www.beachweekends.se – where they organize more training camps in Cape Town, SA and next up in October they will head to Italy.

What was your role during the camps, and what were the major differences to the camps and training we run?
In Uppsala we had our own group and own court, so we ran drills with the topics as mentioned. As the sessions were 3 hours, the pace was a little slower than the usual 1.5 hour session we have here, with more time to discuss and explain things in more depth. I encouraged the players to ask lots of questions, and to ask for as much feedback as possible, as we could stop and chat it out. Hopefully as a new coach to these players, I could give them some fresh ideas or descriptions about their technique, some gameplay tactics, reinforce what they already know, and build on that.

Gabriela requested that the focus for the BEACH WEEKENDS CAMP was competitive situations and gameplay. The players had done a lot of technique work during the winter, and now coming into summer – wanted to learn how to put all that into points, rallies and competition, getting ready for tournaments.

The obvious difference is the location and training environment. We run our regular trainings, and our camps on public beaches where we encounter more wind. Sweden has lots of courts in Public spaces, community parks, and Sport and gmnRec Centres. Gothenburg has the World’s Largest Beach Volleyball facility with 16 indoor beach courts and 8 outdoor beach courts – Beach Center Goteborg – it would be awesome to check it out one day.

Most of the year Swedes will train at these indoor beach courts, because of the climate. ‘The Beach’ is an amazing venue close to Stockholm, with 8 courts for beach volleyball. I hope that one day Sydney has venues like this, so people further from the coastline can train and play beach volleyball, and the sport can grow. Through Europe, and all over the world, Beach Volleyball Camps are really popular. There are so many offered, and look like a lot of fun. They are everywhere from Spain, Portugal, Italy, Turkey, Sri Lanka, France, the US, Brazil, Germany… the list goes on.

Skills wise, we are on the same page – there are no crazy or major differences in the styles of play. There is always the emphasis on consistent setting and effective attacking.

Did you learn any new coaching tricks/drills we will see soon at the beach?
I really think we are on the right track with what we are coaching here in Sydney, our coaching team is great and I’m proud of what we are offering to Beginners all the way up to the top Squads. Drills and tricks wise, Hannah and I bounced off each other with some competitive point scoring drills, that I’ll implement into my sessions. Its really rewarding when your team creates a winning point off a serve, those first phase kills are so satisfying. Hanging in there through the rally, to then win the point on your own attack is also fun. Not hoping the other team makes the error.

On technique, I believe that players have the freedom to find what works for them. That’s part of the fun of playing, figuring out your own tricks and flair, as everyone is different – with their strengths and weaknesses.

Us coaches will guide and demonstrate the best technique, and help players develop styles of play, and discuss options and variety. We are here to support players with barriers, and progress plateaus – and then it’s up to the individual to find their groove.

We love it when players keep trying things out, and feel OK about making mistakes learning something new. Consistency doesn’t just happen over-night.

When players display their commitment, and set their own goals, may it be fitness improvements, or specific skill adjustments, we want to help players progress into tournaments (or your own social games), where you can put it all into action.

Be honest, what’s better Manly Beach or Sweden?
I definitely appreciate the ocean and the sky at Manly Beach, even in Winter… The fresh air and morning energy from everyone running, exercising, surfing and people catching the sunrise is amazing…

We really do have a picturesque training spot. We’re very lucky.

Great to hear you had a good time over there, but we are glad to have you back Alice!

SEE YOU AT THE BEACH! STAY TUNED FOR OUR NEXT INTERVIEW.

7-Min Morning Workout Videos to follow step-by-step Check out our Morning Routines as part of our Beachvolleyball.com.au Online Coaching Program. You can do all these

7-Min Morning Workout Videos to follow step-by-step Check out our Morning Routines as part of our Beachvolleyball.com.au Online Coaching Program. You can do all these

Our “Today’s Online Session” section is concentrating on different topics every time. We will cover technical, tactical, strategic, physical or mental topics. Today’s session is

See you on the Sand!

* Results vary from person to person.

See you on the Sand!

* Results vary from person to person.